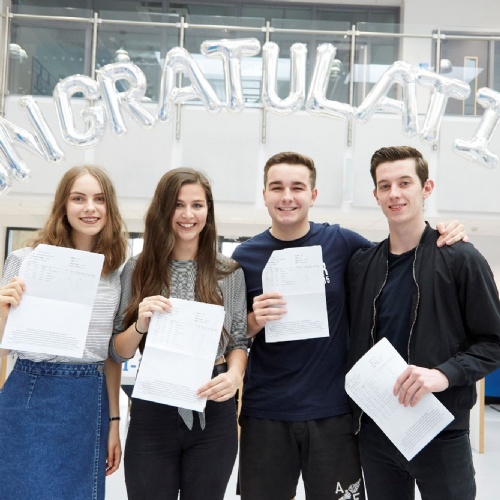 Students are celebrating exam success today after all their hard work. Headteacher Mr McCready said: ‘We are delighted with these results, especially considering the new specifications and the uncertainty around grade boundaries. The overall average grade per entry has increased from 2016 and we have a 99% pass rate, as well as a 10% increase in students achieving A*-B or equivalent grades.’

Particular success stories included Sara Sabha who achieved achieved A* in Geography, A in History, A in French and A* in the Extended Project Qualification. She is going to Oxford University - to Pembroke College to study European and Middle Eastern Languages. Sara said ‘I’m so pleased, Oxford is my dream university and  I can’t believe I’m going there, it’s just started to sink in. I’ve had the best teachers ever, I couldn’t have done it without them but I guess you’ve just got to believe in yourself. My mum is so proud! I’ve now got six French books to read before the start of term so I’d better get started!’

James Lucas achieved A*, A, A, B and an A in EPQ and will be going to Manchester to study Physics. He will be joined there by former Head Girl Olivia Young. Yuhua Feng achieved A*, A*, B and an A* in EPQ. Lydia Keough gained A*, A, A and will study Maths at Durham. Newcastle was the university of choice for Elle McCann, Beth Reeves, Rachael Hardy and Aimee Edwards, who, with a string of A*s and As between them will be studying Architecture, History, French/Japanese/Politics, and Geography respectively.