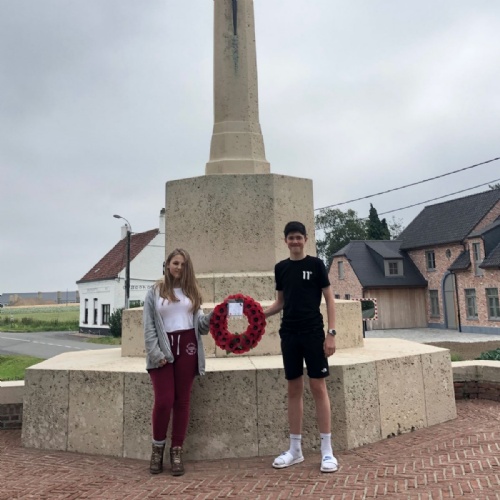 Students on the trip were able to gain a useful insight on conditions faced by soldiers from both sides on their intense and, at times emotional, Battlefields tour, with a packed itinerary as follows:

Day 1 'Visited Lijssenthoek Military Cemetery. Laid a wreath to commemorate those who lost their lives in WWI. Next stop Passchendaele Museum, excellent reconstruction of both German and British trenches. Spent time at Tyne Cot, the largest Commonwealth cemetery in the world, with over 8,000 graves of unknown soldiers. Our visit to Essex Farm Cemetery showed us the grave of the youngest known soldier to die during WWI. Valentine Strudwick was 15 when he was killed around Ypres. Langemark is the main German cemetery in the Ypres area, with 44,292 burials, including a mass grave of 25,000. Such an interesting contrast to the British cemetery for the students to see. For our last visit of the day we went to Hill 62, also known as Sanctuary Wood. Part of a preserved trench system, allowing the students to see the conditions soldiers experienced.'

Day 2 'The first visit of the day was to Wellington Quarry. Troops were hidden in these underground tunnels for 8 days before the Battle of Arras. This was one of the bloodiest battles of the war which saw 4,000 casualties every day for the five weeks of the offensive. Our second visit in the Somme area was Lochnagar Crater. The spot where the largest of the 17 mines was detonated by the British on the first day of the Battle of the Somme. The largest monument on the Somme was our next destination. Holding the names of over 72,000 soldiers whose bodies were not found, Thiepval gave the students an idea of the scale of loss as a result of the Battle of the Somme. A very quick stop at Euston Road Cemetery. Two students visited family members for the first time, both of whom served in the East Yorkshire Regiment, both of whom died on 13 November 1916. Our final visit of Day Two took us into Ypres to see the Last Post Ceremony. Performed by the local volunteer fire brigade, this ceremony has taken place every night since 1929, with a break between 1940 and 1944 due to German occupation during WWII. A moving experience for all and a great way to finish the trip.'