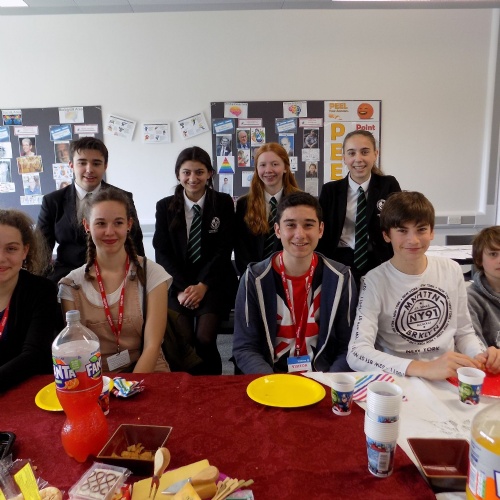 Students and languages teaching staff were delighted today to welcome six students from le collège Pierre et Marie Curie near Nantes, along with Janet Atken and Jane Knight who are part of the North Ferriby twinning association team. The Twinning Association was formed in 2003 to foster friendship and share knowledge and understanding between North Ferriby and Le Pellerin in Loire-Atlantique, France. It organises social events and has worked hard to involve primary and secondary schools on both sides. Jane Knight said ‘This time we are hosting our French friends from Wednesday until Sunday and have been on a variety of visits, including Bempton and a guided tour of the old town. I would like to thank Mrs Hogan for inviting us into Wolfreton and allowing us to sit in on a variety of language lessons. We were also fortunate to have a tour of the school.’

Wolfreton students were pleased to be involved in the visit. Year 9 student Alfie said ‘We have recently been writing to penpals in our French lessons, describing our families and discussing which subjects we enjoy at school.’ Year 11 student Katie added ‘I am enjoying being able to communicate more fluently and really see progress from my starting point.’ Year 13 student Alice said ‘It’s great to be able to speak to someone in their own language. Even if you’re not perfect it’s worth making the effort. Learning a language gives you more opportunities in life and helps you broaden your horizons.’

Mrs Hogan said ‘It has been wonderful to be able to support North Ferriby with their twinning initiative. It has allowed our students to be exposed to French culture and given them the chance to learn more about the similarities and differences between the school systems in England and France.’