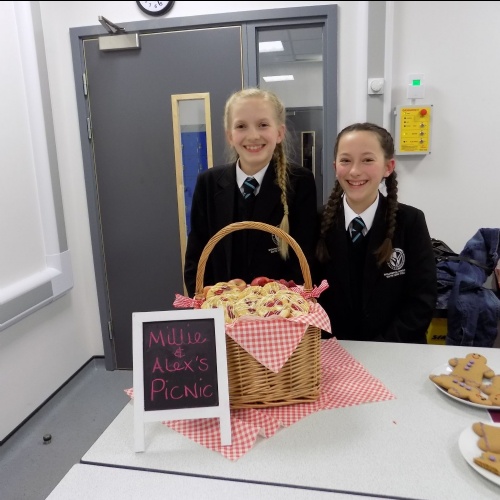 Well done to all our students who took part in the final of the Wolfreton Bake Off. After winning through their House heats, where students across the school were tasked with creating a perfect Victoria sponge, the selected students then had to make cookies to become Wolfreton’s champion baker.

Representing Wilberforce House were Year 8 students Alex Dunn and Millie Morris. They explained that while everyone was making cookies, they were all following different recipes as they had each brought in extra special ingredients to add to the basic cookie recipe. Alex said ‘We brought in treacle, raspberries, milk, white chocolate and brown sugar.’ Millie added ‘We are going to present our cookies in a basket and we have a blackboard sign saying ‘Millie and Alex’s picnic.’

Year 7 Rowntree student Charlotte Holdstock said ‘I’ve brought in vanilla extract, icing sugar, cocoa and a chocolate orange. I’m going to make a cookie sandwich – it will be a cookie, then butter cream, then another cookie covered with melted chocolate.’

Representing Nightingale were Year 11 twins Sophie and Emily Dixon who made cookie gingerbread men. Emily said ‘We’ve brought ginger, cinnamon and golden syrup as that is a flavour we like. We’ll decorate the cookies with icing and smarties.’

Tomlinson Year 8 students Rosie Barrass and Lucy Beecroft were going for a chocolatey orangey theme, with orange zest, orange juice and chocolate chips as their extra ingredients. The plan was to present star shaped cookies, coated with white icing and a red T for Tomlinson.

Owen House fielded the only male contender, Year 7 student Matthew Jeffery. His aim was to use white, milk and dark chocolate and decorate the cookies with extra chocolate once they were baked.

A lucky group of sixth form students took care of the judging, awarding all students marks for taste, texture, uniformity and overall appearance. After a very close competition, with everyone being congratulated on their efforts, the results were as follows:

Mr Thornham, Head of Wilberforce House, said ‘It was great to see so many students from all the Houses taking part in our first House competition of the year. It was fantastic for Wilberforce to win this first competition and I am very proud of everyone – we’re looking forward to all the competitions to come!’