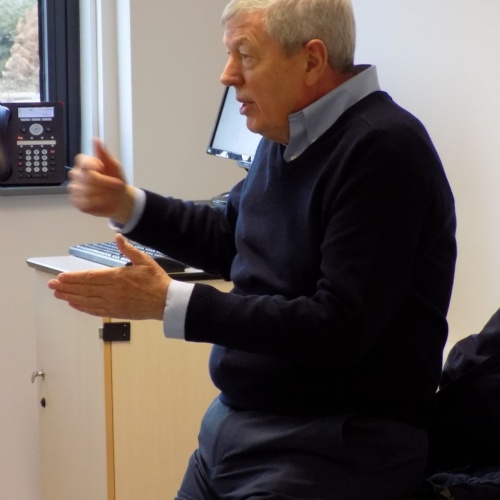 Wolfreton Sixth Form Politics students had the opportunity today to meet Alan Johnson, MP for Hull West and Hessle. Mr Johnson spoke to students about his background, his thoughts on the current political climate locally, nationally and internationally, as well as taking questions from the floor.

He said that although this is the most uncertain of times in politics for as long as he can remember, looking back to his parents’ time when they faced two world wars put things in perspective. Although as a nation we face the difficulties of working with an American President-elect who is a ‘climate change denier’, along with the state of flux regarding the European Union, locally Hull and the East Riding are enjoying good times. He said ‘Along with many other people, I was heavily involved in the work that went behind securing Siemens’ investment in Hull. This has led to the creation of 1,000 jobs and could lead to investment by other companies. One of the reasons that we secured our City of Culture status for this year was by not just trading on our past, but also looking to our future and where we want the city to be as we move forward. There’s definitely a feeling of optimism –the city has been waiting for a new opportunity like this since the collapse of the fishing industry.’

Students asked him questions ranging from how Brexit may have a negative effect on Hull’s City of Culture status, his thoughts on Jeremy Corbyn’s leadership, to how he sees his own career progressing.

Asked whether there should be reform of the House of Lords he said ‘Yes, it is a complete anachronism, it’s shaming in fact. Historically, as a nation, we’ve had a huge role to play in democracy and as such I am ashamed that our second chamber is appointed. The attempt at reform has been going on for a hundred years but the Lords are very good at protecting their rights. Hereditary Peers are now almost gone but we still need to move to an elected House. It has a very important function to play as it scrutinises the actions of the First House.’

Questions then moved on to whether he could understand why, not only here but across Europe and in the USA, big upsets had occurred in recent elections, whether support for the SNP has comprised Labour support and why there are no tuition fees or prescription charges in Scotland. He said ‘The reality is that 80% of people in this country don’t pay for prescriptions anyway, whether that’s due to pregnancy, maternity leave, old age or long term illness. This means that the only people actually paying are those who can afford it and this provides revenue directly to the NHS which is desperately needed. With regards to tuition fees, I introduced this back in 2004, as there was a £10 million funding gap. The Dearing Commission Report said society, employers and graduates needed to contribute and it’s still the case that graduates pay nothing back until they earn over £21,000 after graduation. You pay nothing if you’re unemployed or on maternity leave and I think we need to think of it as something different to a regular debt, it is manageable. Tuition fees may be unpopular, but for the future of education funding, they are necessary.’

Blair: ‘A good leader, with education, the NHS and poverty all transformed under his government.’

Iraq: ‘I voted to support this the first time parliament voted on it, and I would do so again. Saddam had rung rings around the United Nations, committed genocide and refused to allow weapons inspectors in.’

Immediate appointment of Theresa May following resignation of David Cameron rather than an election: ‘I have no issue with this, it follows an accepted well-trodden path with Macmillan taking over from Eden, to more recently John Major from Thatcher and Gordon Brown from Blair.’

After an hour with the students, Mr Johnson was thanked by Politics teacher Joe Thornham, who said ‘Our students are enjoying learning about different aspects of the political system but nothing beats having someone like Alan Johnson here, with his wealth of experience. It has been fascinating listening to his thoughts and I’d like to thank him for giving our students a great opportunity to quiz him on such a wide range of subjects.’

Student Ellie Dickens, 18, said ‘Having this visit by Alan Johnson was really helpful. It was relevant to a unit I’m doing on changes to the constitution, particularly when he talked about Brexit and the effects it will have on society. It was also interesting to hear his opinion on tuition fees, especially as we’re about to go off to university.’

Student Emily Stephenson, 17, said ‘I found it interesting how open he was in answering a wide range of questions, including opinions on the Labour leadership. Listening to him made sense of what we’ve studied and brought it to life. It was good to hear his support of Hull as City of Culture and the local area as a whole and his constituents. It was good to see that it’s not just about laws being made in parliament but that it’s about taking it to the people.’