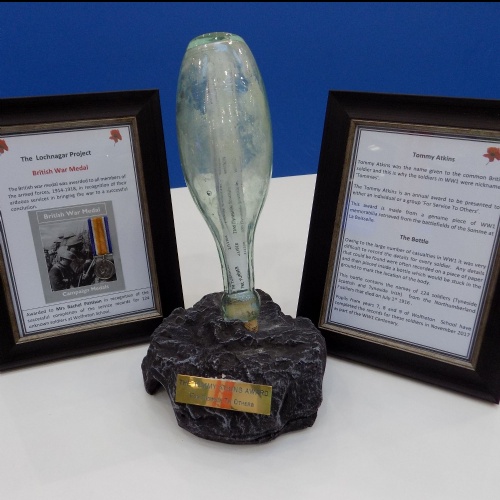 Students have completed the WW1 Lochnagar Project, handing over the information they have researched. The names of the 124 soldiers that our Year 7, 8 and 9 students researched were symbolically placed in a bottle. Owing to the large numbers of casualties in WW1 it was difficult at the time to record soldier details. Information that could be found was often recorded on paper and placed in a bottle in the ground to mark the location of a body. The bottle here is an original artefact from the Somme and contains the names of all 124 soldiers that Wolfreton students researched.

Head of History Mrs Pattison was presented with a British War Medal Campaign Medal in recognition of the successful completion of service records for the 124 unknown soldiers. She said ‘Our aim was to connect one student with one individual soldier as it can be difficult to get your head around the statistics of war and this was the perfect way of making a personal connection.’

Year 9 students Will Dodson, Tilly Leckenby and James Rogerson were among those who took part in the project and presentation in preparation for their Battlefields trip next year. Will said ‘It has been a very useful project as it has helped me take the time to remember that these soldiers were actual people, rather than just an unknown mass.’ Tilly said ‘We were all keen to take part as we were interested in finding out more about the war.’ James added ‘We are all going on the school Battlefields trip next year and it has been very helpful to learn more about WW1 history before we go.’